Frank A. Coppa is an experienced litigator, having litigated in both State and Federal court, as well as before the American Arbitration Association. By combining his litigation experience with an understanding of his client’s goals and aspirations, Frank is able to effectively and efficiently represent his client’s interests.

Prior to establishing his current firm in Wyckoff, New Jersey, Frank was associated with one of New Jersey’s largest law firms where he was a member of the firm’s Commercial Litigation, Banking & Financial Services, Bankruptcy & Creditors’ Rights and Construction Groups. Frank was responsible for numerous matters from pre-suit investigation through trial, and litigated on behalf of his clients before the United States District Court, District of New Jersey, Superior Court of New Jersey and the American Arbitration Association.

Upon graduation from law school, Frank served a judicial clerkship for the Honorable Robert J. Passero, Assignment Judge, Superior Court (Ret.) and then had the opportunity to serve the citizens of New Jersey as a Deputy Attorney General with New Jersey’s Office of the Attorney General. As a Deputy Attorney General, Frank represented the Division of Consumer Affairs and was responsible for the civil and administrative prosecution of violations of the New Jersey Consumer Fraud Act and related statutes and regulations. Frank was responsible for investigating and prosecuting the numerous companies for their fraudulent business practices. Frank also served as counsel for the State of New Jersey in several National Association of Attorneys General multi-state enforcement actions, including investigations into fraudulent activities of national mortgage companies and telecommunications corporations.

Frank earned a B.A. in History from Rutgers College where he was a four-year varsity athlete and varsity letter winner, and his J.D. from Rutgers School of Law-Camden. He resides in Bergen County with his wife and three children.

*   “The Protection Afforded to Limited Partners in New Jersey LLPs Could Be At Risk,” Commerce Magazine, December 2011 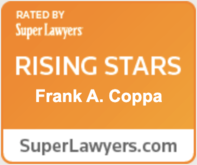